Ticks and Lyme disease are on the rise in Canada

There has seen a steep rise in reported Lyme disease cases in recent years, and as the planet warms, those numbers are expected to continue climbing. With ticks spreading further north each year, some advocates question whether Canada is

prepared to cope with the rise of Lyme disease. The disease, which could cause lifelong health issues, has already infected Canadian luminaries from Avril Lavigne to Justin Bieber, as well as thousands of citizens every year. Here’s what you need

to know about ticks and Lyme disease in Canada.

Why are ticks dangerous?

As parasites that feed from the blood of a wide range of species, ticks can occasionally spread disease from one host to another, said Jade Savage, an entomologist and a professor at Bishop’s University. Lyme disease is the most common tick-

borne illness in Canada, and it’s mainly transmitted through the black-legged tick, Savage continued. These ticks can also spread a number of other diseases. The first black-legged ticks were spotted in Canada roughly 50 years ago in Ontario;

since then, the bugs have been “slowly expanding its range,” Savage said. To track their spread, Savage created eTick in 2014 – a “citizen science project” where people across Canada can submit images of ticks and where they were found.

Locations are mapped so users know which areas are more prone to ticks. So far this year, her site has logged just over 1,000 black-legged tick reports in Ontario – about the same as this time last year, Savage said. 2021 saw more than 2,400

black-legged tick reports in the province, more than the roughly 1,400 in 2020 and the 320 in 2019. She noted the growing public awareness of her site likely fuelled numbers in recent years, and that it only started taking reports in Ontario in 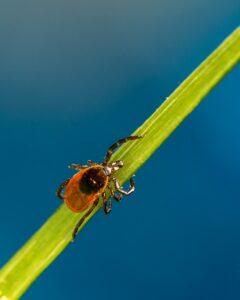 What is Lyme disease?

appear in two stages, the first often manifesting days after a bite, and the second sometimes taking months to materialize. In the early stage, roughly half of people bitten develop a rash shaped like a bullseye at the site of the bite, Chaconas said. If

you find an expanding, target-shaped rash on your body, speak to your doctor immediately, he said. However, rashes of other shapes or even no rash at all is also possible. Once the bacterium is in the blood, it can sail to different parts of your

body, causing different symptoms depending on where it lands, Chaconas said. According to the CDC, these can show up days or even months after a tick bite, and may include: severe headaches, arthritis with severe joint pain and swelling, pain

in tendons, muscles, joints and bones, heart palpitations or irregular heartbeat, facial palsy, and more. “Treated Lyme disease typically goes away and the story is over,” said Chaconas. “But not always.” Similar to long COVID, some people with

Why are we seeing more cases?

From 2009 to 2021, Health Canada has received 14,616 reports of Lyme disease across the nation. A majority of the reports came in recent years – the preliminary data for 2021 counted 2,851, already the most recorded number of cases in a year

to date. Nova Scotia has the highest ratio of ticks to people in Canada, say experts, and only second to Ontario in the total number of reported ticks. Health Canada notes the actual number may be larger due to under-reporting or misdiagnosis.

On the other hand, increased awareness and testing for Lyme disease may add numbers to later years. However, many say they would like to see ramped-up Lyme disease testing being offered more widely in the health system, as early detection

and treatment can often dramatically improve the outcome of the disease. According to Katie Clow, an assistant professor at the Ontario Veterinary College specializing in tick-borne illness, “most of the evidence supports that it’s climate change

that is driving this.” Canada is typically too cold for most ticks to reproduce, but with warmer summers and shorter winters, ticks have gained a foothold in areas they’ve previously never been seen, she said.

When and where are ticks most active?

It’s important to be extra careful when nymphs are around, she said, because they’re much smaller and easy to miss. These time periods aren’t set in stone – the black-legged tick can survive year-round “as long as temperatures are above zero,”

tick occupies Manitoba to the east coast, Savage said. Health Canada has highlighted at-risk areas on their interactive map. These areas mostly stick close to the border and include major cities like Toronto, Ottawa, Winnipeg, Victoria and Halifax.

to check if your neighbourhood is at risk. Ticks and lyme disease in Canada is more common than most people believe.

How can we protect ourselves?

The most important thing to do is familiarize yourself with what a tick looks like and perform routine tick checks after hiking or other activities, said Janet Sperling, president of the Canadian Lyme Disease Foundation. She recommends checking

for ticks while in the shower when you’re already undressed. “If you’re in the shower and you feel a little lump in your hair, go get somebody to actually look for you,” she said. “Don’t assume that you can ignore it.” If you do spot an attached tick,

grab some clean, fine-tipped tweezers and pinch the bug close to the skin as possible. Using slow, even pressure, pull the tick directly up out of your skin, trying to keep the mouth parts intact. Then thoroughly clean the area with soap and water

or rubbing alcohol, according to Health Canada. As it can take up to 24 hours for an attached tick to transmit Lyme disease, Sperling says it’s crucial to remove ticks as soon as possible. Don’t crush a tick with your fingers. Sperling strongly

recommends saving the tick in the freezer, in a bag labeled with the date and location of the bite. That way if you develop symptoms later, you can take the tick directly to the doctor to have it tested. When walking in nature, Sperling recommends

tucking your pants into your socks or at least wearing long clothing. Light clothing is best because then you could better spot ticks if they’re on you. As ticks prefer the cool of tall grasses and foliage, try to keep your lawn short in summer and take

extra care when walking through bushes and thick foliage, she said. Sperling also recommends chemical insect repellents containing DEET or permethrin. “We’re going to have to live with these ticks – they’re here to stay,” said Sperling. “But

don’t let the fear of ticks prevent you from going outside. It just means that you need to know what you’re getting yourself in for.”

Ticks and Lyme disease are on the rise in Canada. Here’s why | TheSpec.com