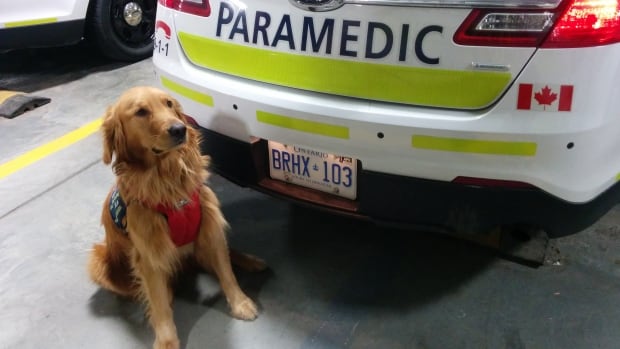 For paramedics, responding to fires, shootings, suicides and other difficult situations is all part of the job description.

But when they’re done taking care of people, who cares for their own mental well-being?

“He’s the first ever in Canada to be trained in a paramedic service, so [he’s] kind of a special breed,” said Tracy Levesque, a primary care paramedic and Max’s handler.

It was about two years ago, said Levesque, that she had the idea to begin training Max as a therapy dog for the paramedic service.

At the time, the I’ve Got Your Back 911 social media campaign — intended to raise awareness about how first responders can end up suffering from post-traumatic stress disorder — was in the headlines.

Paramedic Tracy Levesque trained her golden retriever Max to be a therapy dog for the Ottawa Paramedic Service. (Idil Mussa/CBC)

That campaign “triggered” Levesque to consider the idea that her dog Max, even though he was only 17 weeks old at the time, had the perfect personality to become the service’s own therapy dog.

“In this environment, there’s a lot of trucks — I have sirens that I use in my car — and Max has pretty much no fear of anything. Just a confident dog.”

I’m having fun on my break! Be like me…have fun on your breaks!

Initially a pilot project, Max’s training program was helped along with advice from both the Ottawa Police Service’s canine unit and the Ottawa Humane Society, said Levesque.

‘A part of our family’

Two years after that training began, Max has become a key member of the service’s peer support team, Levesque said. Other paramedic services — both inside and outside Canada — have asked her for advice on training their own therapy animals in-house, she added.

“After critical calls, when paramedics are in a bad headspace, you can see — within five minutes of Max being in the room — that it just gets your mind off of the critical stress incident and more back to reality,” said Levesque.

“He’s really become a part of our family.”