Man found in cold after car crash near Saskatoon dies in hospital: RCMP 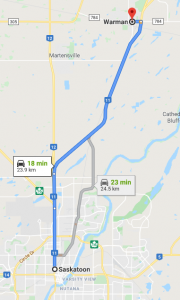 WARMAN, Sask. — Saskatchewan RCMP say a man who appeared to be suffering from hypothermia following a car crash has died. Mounties were called early on Boxing Day about someone walking in the middle of a highway on the outskirts of Saskatoon. They found a 19-year-old showing signs of hypothermia, as the temperature had dipped to about -18 C, and he was taken to hospital

Officers then found the man’s vehicle in a ditch and another 19-year-old man nearby who also appeared to have hypothermia. Officers carried the second man to their vehicle and provided first aid, but he was later pronounced dead at hospital.

RCMP say no one else was found during the search and officers continue to investigate the crash.

This report by The Canadian Press was first published Dec. 27, 2019

What symptoms did the officer see to believe the person was suffering from hypothermia? Do you know what the definition of hypothermia is?

Signs and symptoms can include:

Call 911 and while waiting for EMS to arrive gently move person into a warm area, replace wet clothing with dry clothing and cover as much as the body as possible. Remember do not offer the person anything to drink or eat while waiting for the paramedics.