Naloxone is the generic term for a drug that typically is injected into the thigh muscle.

For all the reasons stated in last article naloxone distribution and community programs are successful in preventing accidental opioid deaths. With 20 minutes of training family members or friends of opioid users can become educated on drug prevention, recognizing overdoses and become knowledgeable in how to respond in an emergency situation.

Hamilton has distributed 500 overdose prevention kits in the last two years.  Hamilton’s “Take Home” program has resulted in 116 lives saved. Deaths related to opioid use in Hamilton are the provinces second highest rate in Northern Ontario (Carter, 2014). This report spurred local officials to put forth a motion to have the nasal spray approved quicker hoping these kits could be in the hands of police officers and firefighters.

Toronto’s POINT Program and NOW Van have distributed over 2000 drug prevention kits and as of 2015 report to have saved 300 individuals from opioid related deaths of the Greater Toronto Area (GTA), a 6.1 million population (Jeffords, 2016).

Even though Naloxone has encouraging outcomes First Aiders are not expected to be trained for these situations nor inject naloxone, but do need to know there are people that are trained to give these injections. These trained people will have cards identifying themselves and more importantly they will have the prevention kits. The overdose prevention kits contain 2 dosages of naloxone, two retractable needles, gloves, a rescue barrier device and a client identification card. 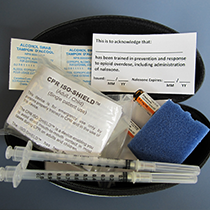 The unresponsive casualty typically wakes up very aggressive, agitated and not wanting to go to the hospital. Regardless, always call 911 because Naloxone’s effects will wear off causing the casualty to be in life threatening danger again.

Hopefully, with the overdose prevention kits in the hands of family and friends, British Columbia’s reported 74 opioid related deaths in January 2016 will not quadruple for the year. (Drug and Health Products, 2016).