Bicycling is a great way to get around, but if you aren’t safe on your bike, it can be dangerous.  I have put together ten of the easiest things to do to keep yourself and other bikers safe. Here are 10 Bicycle Safety Tips to help keep cyclists and drivers safe on the road together:

If you’re going to ride a bike, you need to wear a helmet. That’s it—there’s no way around this one. Helmets are the single most important thing you can do to protect yourself when riding a bicycle.

Be aware of the traffic around you.

You should always be aware of the traffic around you. Whether you’re riding on a rural road or in the heart of your city, there are many hazards that can put your safety at risk. Here are some things to keep in mind:

Be predictable in your movements.

Being predictable in your movements is the simplest way to avoid collisions. Don’t cut off cars, weave in and out of traffic, ride on the sidewalk and against traffic. The more unpredictable you are, the harder it is for drivers to anticipate what you will do next.

Use appropriate hand signals to signal turns and stops.

It’s important to use appropriate hand signals as you ride your bike. It keeps you safe and lets other drivers know what you’re doing. 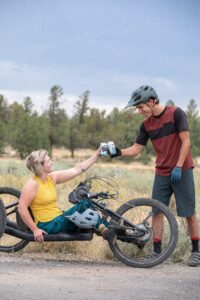 Stay alert at all times.

While riding your bicycle, it is important to stay alert to stay safe at all times. This means that you should not ride distracted, tired, impaired or while listening to music. It also means that you should be aware of what is going on around you—other people and vehicles on the road, as well as obstacles in the path ahead. Always look before crossing a street or intersection and make sure there aren’t any cars approaching from either direction before proceeding across the street. To that end here are 10 T

Ride at a safe speed.

One of the most important things to remember when riding a bike is to ride at a speed that is appropriate for the conditions. You should always try to ride at a safe speed, which means choosing your speed carefully based on what you see around you.

Be cautious at intersections.

When cycling, it’s important to let drivers know you are there. You can do this by making eye contact with the driver or the side mirror of their vehicle. Drivers will see you and be more likely to be aware of your presence when driving defensively. If a driver doesn’t see you, they may pass too closely or even hit you if they make an unexpected move in their lane while passing another car or turning.

I’ve personally had this happen to me before! While riding on my bike one day, I was stopped at a red light when I noticed a driver looking at me in his rearview mirror as he waited for traffic ahead of him to stop so that he could turn left into my path (which was clear at that time). At first, I thought “Oh great! Someone is about to let me go ahead,” but then he made eye contact with me and quickly jerked his head back around toward the road in front of him before proceeding forward into my path without hesitation; luckily there were no cars coming up behind me so no one hit anyone else but unfortunately he did not acknowledge what happened as I rode away from him wondering why on earth would anyone do such a thing?!

You should never ride against traffic since that puts you at risk of being hit by oncoming traffic. If you see a cyclist riding this way, they’re probably lost or just don’t understand the rules of the road. You can help by politely pointing them in the right direction or getting them to stop and talk to you so that they don’t put themselves and other cyclists in danger.

If you are riding with traffic but end up crossing paths with another rider who is biking against traffic and heading toward your direction, yield to let them pass first.

This safety tip can help keep people safe on bicycles!

There are so many reasons why bicycling can be a safe and healthy choice for getting around. It is an environmentally friendly form of transportation that requires no gas or oil to fuel it, so it doesn’t contribute to pollution in the air. If you want to stay healthy and get exercise at the same time, biking is an excellent opportunity for that as well! Biking can also help lower your stress levels because it will give you some time away from work or school where you can focus on something else other than what’s going on around you. Plus, biking lets people spend time outside without having to spend money on gas or car maintenance costs—and there’s nothing like riding in fresh air!

So start pedaling today: if we all take advantage of this great opportunity now then one day soon we’ll all be living in a world where everyone enjoys peace while being able to enjoy nature through their own personal transportation device too! I hope these tips help keep you safe on your bicycle. If you have any questions or comments about the article, feel free to leave them below.

3 Fact or Fiction of first aid